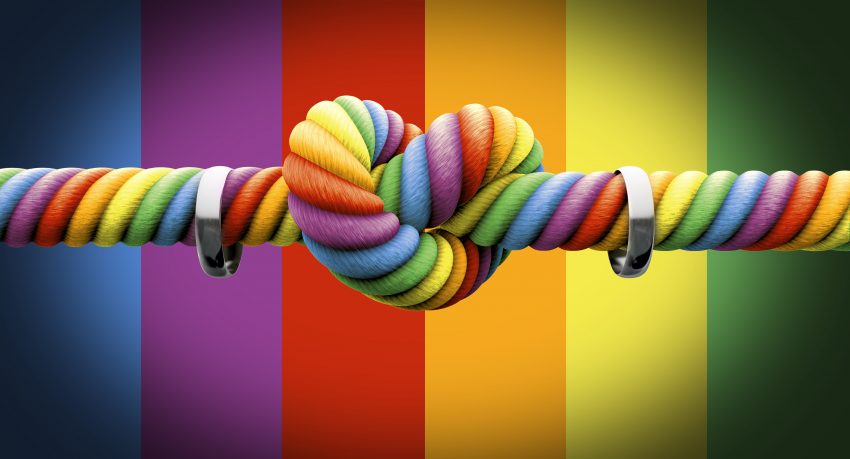 The drive from Vancouver to Whistler is always a thrill, especially on warm spring days— each corner revealing yet another beautiful vista as the road unfolds in a gentle incline into the mountains of British Columbia. It was on such a spring drive that I was listening to On Being with Krista Tippet, one of my favorite podcasts.

This particular episode was an interview with Helen Fisher, an anthropologist best known for her TED talks on love, sex and intimacy and her research for the dating website, Match.com. Fisher’s interview was an entertaining mix of her personal experiences and professional research, and for the most part I was entertained and enlightened. But a pained grimace crossed my face (I have the worst poker face— EVER), and a groan of contempt escaped my throat when Fisher made the following statement,

“I see the profoundly basic human drive to love and form marriages as so important that we’ve created institutions like religion to support it. So even more important than religion are these profoundly basic human drives to love. And religions then build on that drive to support that drive. It’s one of mankind’s institutions that is very supportive of love.”[1]

Noting my pained expression, my travel companion would later inquire about my distaste for this particular statement. In reply, I explained that in contrast to Fisher’s position, I was highly skeptical of a “basic human drive” to marry— arguing instead that the institutions of religion and marriage have evolved to control and exploit the basic human drive to love, as opposed to support it. Furthermore I am extraordinarily weary of biological anthropologists overly dependent on Darwinian evolutionary theories that implicitly and explicitly propagate racialized and gendered notions of superiority. In other words, I’m pretty darn sick and tired of hearing pseudoscientific evolutionary claims that reinforce inequity and injustice by naturalizing and essentializing pretty much everything—from why people “cheat,” to why men do less housework, to what detergent we buy in the grocery store. Sometimes laundry is just laundry!

Fun fact… I just randomly Googled the key words “Tide” and “Evolutionary Claims” and sure enough anthropologists have been making the case for why we are evolutionarily wired to eat Tide Pods— Seriously?!?[2] As annoying as evolutionary anthropology is (and it is very annoying), for the purpose of this particular blog, I would like to focus my attention on the foremost question of whether the institution of marriage evolved to support love or to exploit it.

To help answer this question, I turn to sociologist Jaye Cee Whitehead whose book entitled, The Nuptial Deal explores marriage as a project of neo-liberal governance through the lens of the marriage-equality movement in the United States.[3] The book, published in 2012, three years before same-sex marriages were legalized in the U.S., argues that the historic exclusion of same-sex partnerships from marriage entitlements sheds light on how marriage is a technology of governance oriented to produce a practical outcome— namely the economic management and off-loading of obligations from the social-state to the individual in a neo-liberal capitalist economy.

Marriage, which was once treated with hostility and outright rejection within the radical gay and lesbian liberation movements of the 1960’s and 70’s, became of focal concern in the 1990’s. This dramatic change was the result of three inter-related dynamics; neo-liberal economic policies that valorized self-sufficiency at the expense of social care; the AIDS crisis, that highlighted the precarious nature of same-sex relationships when dealing with matters involving the state such as inheritance rights, access to health insurance and end of life decision making; and the rise of the conservative religious right. The institutional control of marriage can be illuminated when we understand marriage enticements from the viewpoint of the activists who fought for the legalization of same-sex marriage.

The 1980’s neo-liberal ideology, which swept through the political systems of western nations, valorizes self-sufficiency and individual choice at the expense of a collective public care structure, thus solidifying marriage as an essential and privatized care structure. Through marriage, individuals access benefits that mitigate life’s risk, such as securing access to healthcare (through spousal health insurance in the U.S.), inheritance rights, end of life decisions and parenting rights, making the legal acceptance of same-sex couples through marriage critically important.[4] As such, marriage, as a technology of governance, cultivates subjects who become invested in managing social dangers as a couple.

As explained by Whitehead, “Marriage works because it provides a context for the state to economize its own function while also offering couples a set of legal provisions that allow them to manage life risks in a way that promises pleasure, autonomy, and freedom.”[5] Consequently, the fight for marriage equality has supplanted the earlier goals of the radical new-left cultural revolution which had adamantly rejected marriage on the grounds that it was a structure of heterosexual and patriarchal privilege.[6] Within a neo-liberal framework “not only does marriage leave the management of illness, poverty, and disability to individual couples, but it also provides the legal scaffolding for private property and capital accumulation.”[7] Whitehead argues that the marriage equality movement essentially brokered a “nuptial deal” with the state, offering to prioritize the goals of neo-liberal governance at the expense of the radical desire for economic redistribution in exchange for same-sex inclusion to the institution of marriage.[8]

What appears to be a personal “choice” to enter the state of matrimony, is of political interest insomuch as the “basic human desire to love” (as stated by Fisher in the On Being podcast) is reformulated, controlled, legislated and policed as a form of state sanctioned social care. Whitehead eloquently states, “romantic love tends to obscure marriage as a practice of governance.”[9]

It is a technology of population risk-management that conflates love, sexuality and intimacy with social care. Same-sex marriage activists articulate marriage as a form insurance in “opposition to ideals of sexual freedom once central to the gay rights movement” because “it makes sense that people would form stable couple dyads in a country devoid of any other mainstream model of social care.”[10]

Love comes in many forms and Fisher & I would most likely share common ground regarding a belief that humans share a mutually reinforcing need to bond with others. But the conflation of love, intimacy and sexuality with a politically sanctioned model of social care, namely marriage, ignores “the multiple, consensual, and sometimes creative ways that individuals experience love, romance, and sexual pleasure.”[11] Whitehead rightly asks whether it is fair to connect access to structures that help manage life’s risks with state sanctioned marriage?[12] Fisher’s statement that there is a “basic human drive to love and form marriage” ignores the political context in which daily survival is predicated on adhering to normative life course trajectories such as marriage.

Marriage is not a biological drive, but a form of governance that mitigates risk in neo-liberal capitalist economies. To suggest otherwise is a sleight of hand that conflates sex, love and intimate bonds with technologies of risk management such as marriage and limits our ability to imagine alternative care models that are fairer, more efficient and universally accessible to all, irrespective of their intimate sexual relations. As Whitehead suggests, “if we disentangle the multiple functions marriage allegedly performs and sort them according to intimate versus governing purposes, we can imagine alternative, more equitable technologies for insuring life’s risks.”[13]